skip to main | skip to sidebar

It’s murder at Studio4Ward on the capital’s main street – murder with a 300 pound corpse nailed to the wall. 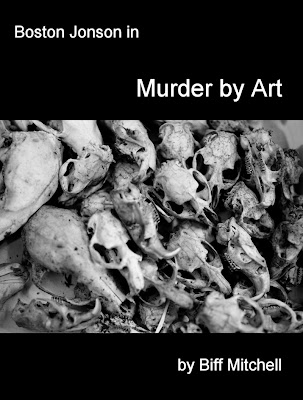 “I came into the studio and noticed that Mr. Cranbury was naked and nailed to the wall. Then painted in candy cane red and white stripes,” said WhiteFeather, one of four artists with studios at Studio4Ward on Queen Street. “Apparently, I’m a suspect.”

The murder of Art Cranbury, beer can artist and fictitious owner of the building that houses Studio4Ward and Backstreet Records, is the subject of Biff Mitchell’s mystery “Boston Jonson in Murder by Art,” which was released as an ebook novella earlier this week by Double Dragon Publishing.

“I wrote the story to promote my next novel ‘Boston Jonson in Murder by Burger,’ to be released this November from Double Dragon,” said Mitchell. “The building housing Studio4Ward and Backstreet Records has exactly the kind of otherworldly mood that fits into the Boston Jonson stories, and the people there are among the most fascinating in the city.”

“So, why create new characters,” said Mitchell, “when I know people with the kind of charismatic personalities to make the story work. With their permission, I even used their real names.”

“The lead character in ‘Murder by Art’ is an investigative consultant in the year 2060 who uses insults and Zen to solve murders,” said Mitchell. “I’m certain that by then the world will be taken over by consultants.”

“I changed the personalities of the characters somewhat to fit the story,” said Mitchell. “For instance, WhiteFeather is one of the most compassionate humans I know, but not in the story, especially with the 300 pound body of one of the worst people she’s ever met hanging on the wall.”

“I sent copies of the story to all the characters, WhiteFeather, Marie Fox, Andrea Crabbe and Eric Hill, from Backstreet Records,” said Mitchell. “They all got a kick out of the story and, amazingly, they’re still my friends.”

“Eric isn’t an artist at the studio,” said Mitchell. “He’s the owner of Backstreet Records, which plays a key role in providing clues to the murder. Plus, the atmosphere in Backstreet provides exactly the kind of juxtaposition of time that fits into the kind of cyberpunk that I write.”

"I haven't killed as many people as I've been accused of,” said Hill. “ I'm not that much of a workaholic. More of a hobby than a calling, really."

“The photo used on the cover was taken by Andrea Crabbe,” said Mitchell. “It shows a collection of animal skulls from WhiteFeather’s studio. She uses them in her art.”

Mitchell is working on a second Boston Jonson novella, this one set in coffee shops around the city.

About Biff Mitchell
Biff Mitchell is the author of three novels and numerous short stories, many of which appear in the award-winning Twisted Tails anthologies. Originally from Toronto, he lives in Fredericton, where he writes novels at the Second Cup Coffee Shop and short fiction at the Harriet Irving Library. Mitchell’s next novel, “Boston Jonson in Murder by Burger,” a satire on big business, is set in Saint John 70 years in the future. Double Dragon Publishing in Ontario will release it this November. Mitchell as a website at www.biffmitchell.com.

About WhiteFeather
WhiteFeather wants to get the hell out of Fredericton, with all of this weird stuff going on, especially in her own studio. She'll be leaving in 2009 to complete her Master of Fine Arts at the School of the Art Institute of Chicago. Until then, you can bet she'll be making more of the disturbing art she's known for, out of human hair and bone. None of this is fiction.

About Marie Fox
Marie Fox is a painter who draws inspiration from fashion, nature and her dreams.She also passionately adores many shades of red.

About Andrea Crabbe
Andrea Crabbe is a visual artist living and studying in Halifax, Nova Scotia. Buttery oil paint, scrumptious words, and vintage, previously chewed treasures are just a few of the bits of life that thrill her.

If you don't click at least one of these links an innocent lemur will die.